Update [06/22/2020]: We released the original thermal data (160 x 120, undistorted, unregistred). There is no groundtruth for these data, although we provide the IPHD registration code and calibration parameters so anyone can try to backconvert the provided IPHD groundtruth to the original thermal space. We do not plan to do that at the moment, but if someone does it and is willing to share it, we will be more than happy to make it public here and give him/her all the credit for that!

This is a freshly-recorded multimodal image dataset consisting of over 100K spatiotemporally aligned depth-thermal frames of different people recorded in public and private spaces: street, university (cloister, hallways, and rooms), a research center, libraries, and private houses. In particular, we used RealSense D435 for depth and FLIR Lepton v3 for thermal. Given the noisy nature of such commercial depth camera and the thermal image resolution, the subjects are hardly identifiable. The dataset contains a mix of close-range in-the-wild pedestrian scenes and indoor ones with people performing in scripted scenarios, thus covering a larger space of poses, clothing, illumination, background clutter, and occlusions. The scripted scenarios include actions such as: sit on the sofa, lay on the floor, interacting with kitchen appliances, cooking, eating, working on the computer, talking on the phone, and so on. The camera position is not necessarily static, but sometimes held by a person. The data were originally collected as videos from different duration (from seconds to hours) and skipping frames where no movement was observed. The ordering of frames is removed to make it an image dataset, although the video ID is still provided.

We provide Depth and Thermal separately for those who want to download only one of them.

The password to decompress the IPHD test data is: "hWy3GZ5.<4cTU'kM" (not including the double quotation marks).

(*) Depth's training and validation zip files have been splitted into 4GB parts using the split Linux command. To re-join them:

$ zip -T iphd_train_depth.zip  # simple check to test everything is okay

and decompress as you normally would.

Decompressing the data, you will find three folders:

Both image and label files share the same filename, but differ in the file extension. The filenames consist of two parts: the video identifier and the frame identifier, e.g. "vid00057_8vpTIK5t.".

It contains the set of images in PNG format.

Depth data are 1-channel 16-bit images of size 1280x720. Each pixel in a depth image represents the distance to the depth camera in millimeters (mm). The zero-valued (depth = 0) pixels are error readings that can be caused by several factors. This are normally border pixels in human silohuettes or objects. Errors can be also caused by material reflective properties (shiny floors, mirrors, etc) or strong illumination sources (either from the Sun or bulbs). The data has been recorded using an Intel RealSense D435 device.

Thermal data are 1-channel 16-bit images of size 213x120. Each pixel in a thermal image represents the absolute temprature in Kelvin (K) degrees times 100. So, for instance, a pixel value of 37315 is a temperature reading of 373.15 K. Since thermal is registered to depth, the thermal frames can also contain zero-valued pixels derived from depth errors. An erroneous depth impedes finding the thermal-to-depth pixel correspondance. Take also into account the original size of thermal frames is 160x120, but lateral bands of 0 values were added to match the aspect ratio to depth frames and ease the spatial registration. The data has bee ncaptured using a FLIR Lepton v3 sensor.

Each label file (.txt) contains the bounding box annotations for the corresponding frame. It contains a set of rows, one row per human bounding box. Following the YOLOv3 standard format of annotations, the five (5) values of each row respresent:

The normalization of x, y, width, and height allows us to use the exact same labels for the images of Depth and Thermal despite having different image resolutions.

Annotation (bounding boxes) was done manually following the annotation guideline of PASCAL VOC 2012, plus one additional constraint: a box has to contain at least 20% of valid pixels (these are non-depth-error pixels and depth value of less than 10 meters. This way we discard human annotations of far-away blobs that could be confused with depth noise or that are simply very small bounding boxes for our low-resolution thermal images.

The data has been annotated by two human annotators. For tranining/validation data, this has been done on the Color modality (not provided). To be able to use the color labels in depth and thermal, all the three modalities had to be spatiotemporally aligned beforehand. Although spatial registration is accurate, there can be temporal missalignment for dynamic scenes. Therefore, the provided cross-modal labels should be better considered "weak" labels. For the test data, however, we minimized this as much as possible by a better spatiotemporal synchronization  (see the aligned thermal in Video 1) and a much more careful and exhaustive manual supervision on depth/thermal modalities individually. More details on this in the next section.

Registration and synchronization are crucial in order to be able to use the Color annotations for Depth/Thermal and, also, to successfully exploit complementary information between Depth and Thermal in any promising fusion method.

Figure 2. Depth is on-the-fly registered to Color at capturing time by RealSense. Instead, Thermal to Depth required our own offline registration.

While the spatial registration accuracy is near pixel level (see in Figure 3) on static scenes, regarding the temporal synchronization there can be some missalignment on dynamic scenes with rapid movements. This is due to two factors:

Visualization of thermal images can be tricky after they have been registered to depth. Depth images contain errors which impede a valid mapping of some thermal pixels to depth image space. We set these thermal pixels also to 0 (as depth error ones). Besides neighboring pixels to those error pixels that are mapped during the registration can be affected by the interpolation used in the mapping function, causing these to take near-zero or intermediate values (non-plausible temperature readings). This phenomenon increases the range of thermal pixel values, compresses the more plausible thermal readings altogether, and directly normalizing and colormapping not achieving good enough contrast.

Try for instance to visualize a thermal image using Python and OpenCV with the following code:

The result will be:

If we take a look at the histogram of thermal pixel values: 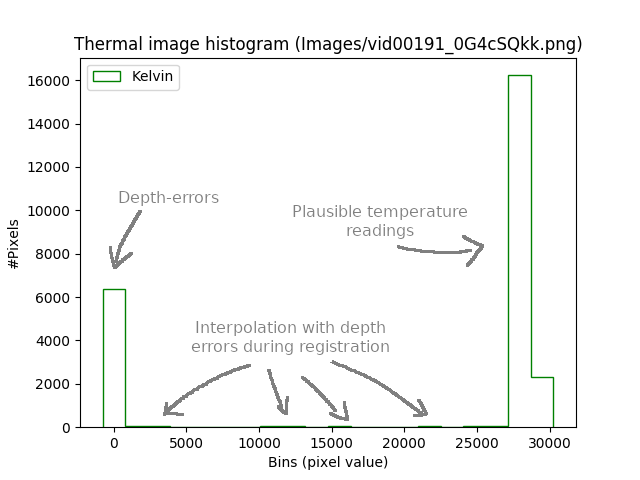 The simpliest solution in order to better visualize the image is to clip unplausible thermal readings:

AP is measured at a fixed intersection-over-union (IoU) value. The IoU value determines how much overlap is required between a detection and potentially matching groundtruth annotations in a frame to be able to count the detection as a true positive (TP). PASCAL VOC uses AP at IoU = 0.5 – namely AP@0.5 –, whereas COCO averages AP at different IoU values (from 0.05 to 0.95).

Having fixed the IoU value, AP can be computed following the explanation from Everingham et. al:

For a given task and class, the precision/recall curve is computed from a method’s ranked output. Recall is defined as the proportion of all positive examples ranked above a given rank. Precision is the proportion of all examples above that rank which are from the positive class. The AP summarizes the shape of the precision/recall curve, and is defined as the mean precision at a set of eleven equally spaced recall levels [0,0.1, . . . ,1]:

The precision at each recall level r is interpolated by taking the maximum precision measured for a method for which the corresponding recall exceeds r:

where p(˜r) is the measured precision at recall ˜r. The intention in interpolating the precision/recall curve in this way is to reduce the impact of the “wiggles” in the precision/recall curve, caused by small variations in the ranking of examples. It should be noted that to obtain a high score, a method must have precision at all levels of recall – this penalizes methods which retrieve only a subset of examples with high precision (e.g. side views of cars).

Differently from Everingham et. al's AP, we do not define 11 equally spaced intervals but as many as instances in the validation/test set, as in the implementations of [1,2,3]. For more detail, check the evaluation script, which is also provided in the "starting kit" fo participants of the CodaLab competition, linked in FG2020's ChalearnLAP Challenge on Identity-preserved Human Detection.

For the purpose of FG2020's ChalearnLAP Challenge on Identity-preserved Human Detection, AP@0.50 will be used to rank the performance of participants' methods. The relatively lower IoU, i.e. 0.5, has been set in order to compensate for the "weak" cross-modal labels.

There are no news registered in Identity-preserved Human Detection (FG'20)