Human detection in images/video is a challenging computer vision problem with applications in human-computer interaction [1,2,3,4], patient monitoring [5,6,7], surveillance [8,9,10] and autonomous driving [11,12,13], just to mention a few. In some applications, however, keeping people's privacy is a big concern for both users and companies/institutions involved. Most notably, unintended identity revelation of subjects is perhaps the greatest peril. While video data from RGB cameras are massively available to train powerful detection models, the nature of these data may also allow unpermitted third parties to access such data to try to identify observed subjects. We argue that moving away from visual sensors that capture identity information in the first place is the safest bet. However, the lack of these more privacy-safe data affects the ability to train big deep-learning models, thus affecting negatively the popularity of these sensors.

In this competition, we offer a freshly-recorded multimodal image dataset consisting of over 100K spatiotemporally aligned depth-thermal frames of different people recorded in public and private spaces: street, university (cloister, hallways, and rooms), a research center, libraries, and private houses. In particular, we used RealSense D435 for depth and FLIR Lepton v3 for thermal. Given the noisy nature of such commercial depth camera and the thermal image resolution, the subjects are hardly identifiable. The dataset contains a mix of close-range in-the-wild pedestrian scenes and indoor ones with people performing in scripted scenarios, thus covering a larger space of poses, clothing, illumination, background clutter, and occlusions. The scripted scenarios include basic actions such as: sit on the sofa, lay on the floor, interacting with kitchen appliances, cooking, eating, working on the computer, talking on the phone, and so on. The camera position is not necessarily static, but sometimes held by a person. The data were originally collected as videos from different duration (from seconds to hours) and skipping frames where no movement was observed. The ordering of frames is removed to make it an image dataset (the only information provided is the video ID).

For the competition, we ask the participants to perform human detection in the visual modalities provided. There are three (3) tracks associated to this contest: 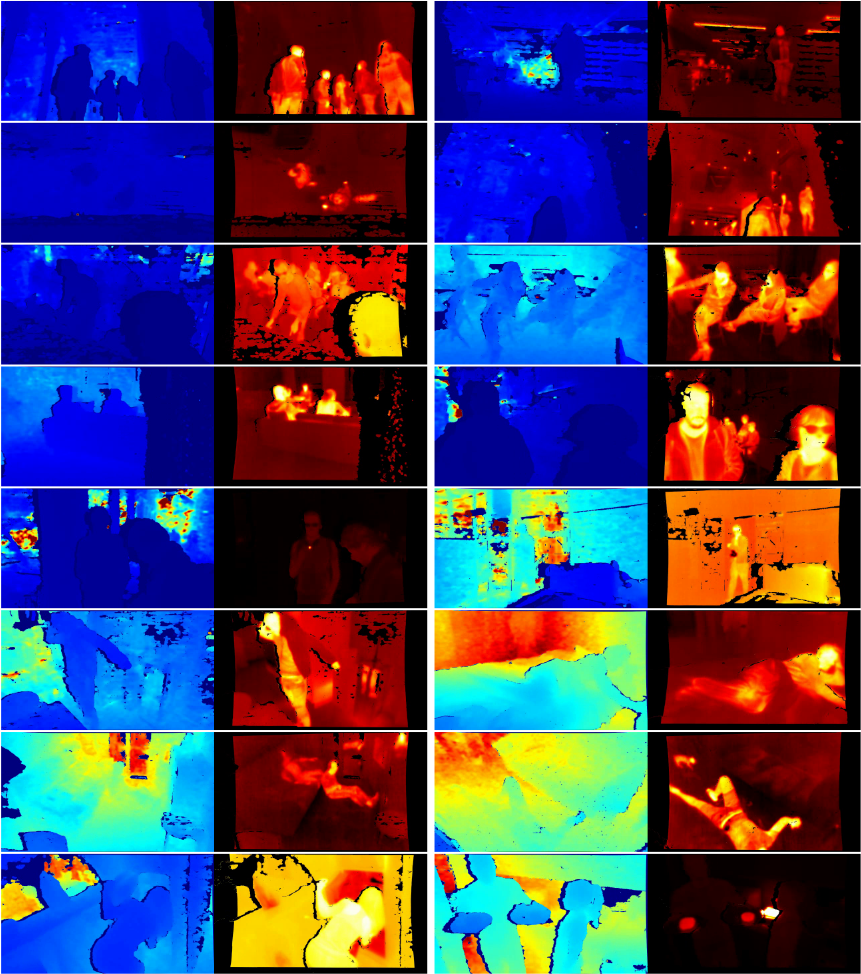 The metric for evaluation will be average precision at IoU=0.50, i.e. AP@0.50, computed from precision-recall curves. For more details on the metrics refer to the IPHD dataset. The scripts for calculation of this metric will be provided to the participants in a “starting kit”.

How to enter the competitions and how to evaluate them

The competition will be run on the CodaLab platform. The participants will register through the platform, where they will be able to access data, evaluation scripts, submit their predicitions on the validation data to enter the leaderboard, etc.

These are the links to the CodaLab tracks:

Once the competition has ended, the organization team will need to verify the results. For this, we will ask the participants to submit a link to a compressed for each track they participated in to iphd.baselines@gmail.com containing the following:

(*) Apart from the instructions, we strongly encourage the participants to share their codes in a docker image including required libraries and material. The original data and groundtruth could be mapped as a volume within the docker container. Hopefully, this will reduce the amount of back-and-forth communication/disruption.

We also kindly ask to the participants to be available during the verification period (from Feb 8th to Feb 11th) for any assistance that might be required via the communication e-mail specified in the Fact sheet.

The participants will be invited to submit a paper to its associated FG 2020 workshop via CMT. who obtain the best results in the challengeSubmitted papers will need to follow the IEEE 2020 FG guideliness.

[12] Mao, Jiayuan, et al. "What can help pedestrian detection?." Proceedings of the IEEE Conference on Computer Vision and Pattern Recognition. 2017.